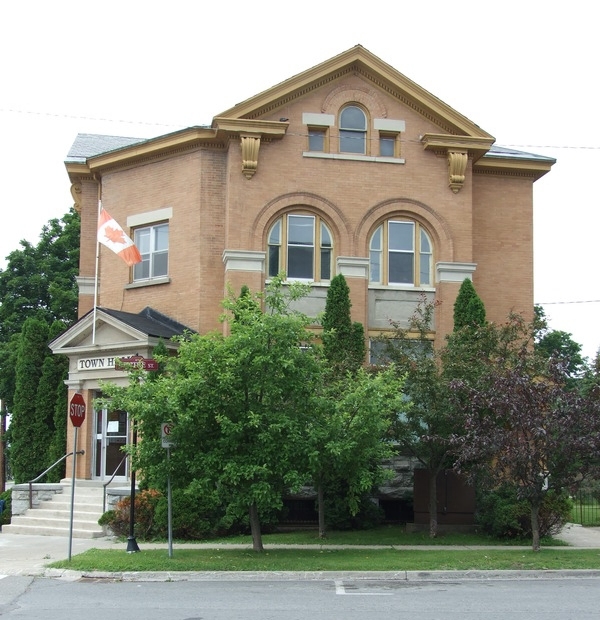 Like many fine Edwardian buildings in small town Ontario, Deseronto’s town hall started out as a bank. BMO had the building constructed in 1904 and occupied it until 1932 when the branch was a victim of the Great Depression.

In 1905 Standard Bank arrived, and constructed a smaller but still solid edifice on the opposite side of Main Street. Standard merged with the Canadian Bank of Commerce and later became CIBC. But that original branch is still functioning after 111 years. Unfortunately it won’t be in a couple of months – and the town’s last bank will be history.

CIBC’s Deseronto branch isn’t a victim of the 20th Century’s Great Depression, or the 21st Century’s Great Recession. Closing it down results probably from a combination of obtuse corporate greed, and the disruption of the Internet.

I remember getting my first bank account with that branch over 60 years ago, and I was a CIBC customer for quite a while. A move to Montreal in the mid 70s left me with no convenient Commerce branch to bank in, so I was forced to change to RBC.

When I first banked with CIBC, if you had excess cash you had to take it to the bank. I saved my allowance there – well some of it. The lady kindly took my little passbook, wrote in the amount I was depositing, initialed the deposit and handed it back. I felt like a real financier. This is a story I’ll have to tell my grandkids, as they already think I led the most primitive life back when I was their age.

Today we have telephone and Internet banking, check our balance online, transfer funds and pay our bills with a couple of mouseclicks or finger taps. You can photograph a cheque (if you ever get one) using a smartphone and the bank will deposit the funds for you.

The banks don’t want to see you for deposits and withdrawals any more. They want to sell you insurance and mutual funds, or draw up a mortgage or Line of Credit for you. It’s all about relationship building and not at all about transactions, thank you very much.

Well what about the relationship they built over the decades with the oldest seniors? You know, the ones that are not computer literate and depend on cash that they get from visiting the bank and using a teller. The ones who maybe can’t drive 10-20 Km to a bank in a neighboring town. Let them fade away, says the person in charge of whether a branch lives or dies. CIBC doesn’t even intend to leave a bank machine behind when they get out of town.

I don’t bank with CIBC any longer, nor do I live where I grew up. But if I did I would be looking for a new bank today. Not only can’t I take it to the bank, when it comes to CIBC I won’t be.

Family Hobbies Life Experience Technology Travel
Posted on December 27, 2019December 27, 2019
So I did end up taking the Nikon DSLR to Sydenham. Considering the amount of stuff we were toting anyway, the extra camera/flash bulk...
Family Life Experience
Posted on December 17, 2016December 15, 2017
100 Years ago today a young baby named Mary Minetta Louise Hawley was born. That is her being held by her great uncle Weston...
Family Life Experience Travel
Posted on May 2, 2019
As we sailed into Gibraltar’s harbor, we were struck by the fact that there were a lot of ships anchored there. We found out...