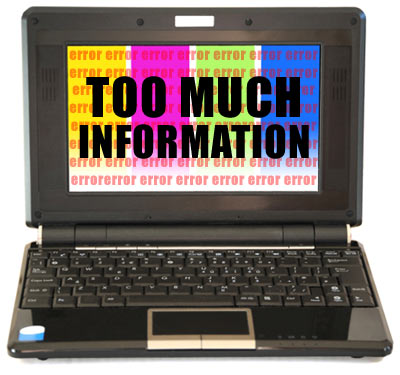 Well maybe I can’t program a PVR but I do know how to fix most computer problems. Here are a couple I dealt with the past couple of days, courtesy of my coffee group of old fogies.

Problem #1 – Customer has a new desktop which features both a wifi and wired connection capability. He was having trouble getting on the Internet and after contacting Bell support was told that the two ways of connecting were competing. He was advised to unplug his wired connection to his gateway. When he did this, he said his problem cleared up but then his wife couldn’t get on the Internet with her iPad. I didn’t see the connection between the two problems, but a visit to his house revealed that in unplugging his wired connection he had also unplugged a special wireless access point his wife needed to get online. The cable was loose. So I plugged it back into the gateway. Problem solved.

Problem #2 – Second Customer has complained for days that after installing Windows 10 he has lost his Recycle Bin from the desktop. I tried a couple of times to troubleshoot this over the phone without success. Again I had to make an housecall.

When I saw how his desktop looked (this was an old school non- touchscreen laptop) I couldn’t believe it. No desktop icons at all, and the Windows 10 Start button didn’t appear to work in the slightest. I restarted the machine, the desktop appeared briefly and then disappeared. I dove into the settings and discovered that the laptop for some reason was in Windows 10 Tablet Mode and I was actually looking at the famous Windows 8 Start Screen. Customer had taken all the “Modern” app tiles off the screen so it was totally blank – that’s why the “Start Menu” didn’t work either. I switched off Tablet Mode, the desktop reappeared along with all the Icons, including the Recycle Bin.

Now you might ask how the machine got into Tablet Mode in the first place. Well Customer #2 has an Android tablet which has some bizarre app called Side Sync – useful to make your laptop look like a tablet. Apparently he thought this would be a good idea so he installed it on the laptop. Go figure.

All this domestic IT work happened because in my view computer technology is still too difficult for people to actually use without getting into trouble – even after 25 years of Windows. Installing Windows 10 isn’t making it any better. Most of the time when I help someone these days it’s because they have screwed something up and don’t know how to get back to normal. I end up with a lot of detective work, basically figuring out what they did wrong. Some stuff they do I never have seen in close to 50 years of computer operation. At least I know why most employers still lock computers down totally in the workplace.

Too Much Information if you ask me.