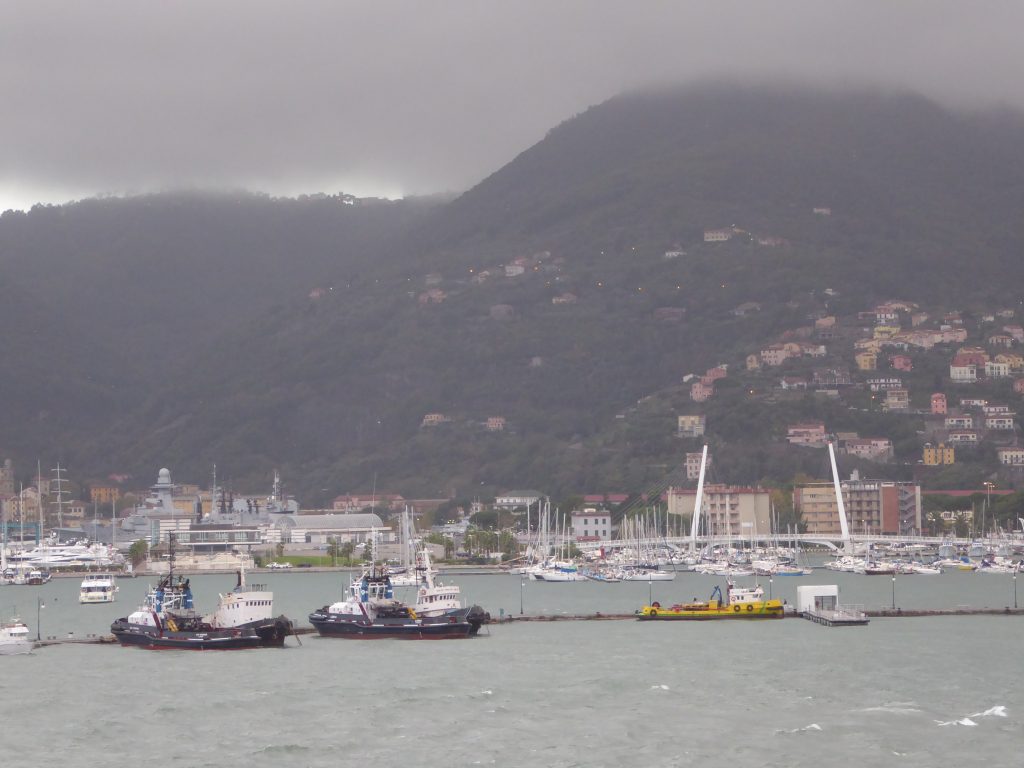 It was a bumpy first night on the Mediterranean and as the ship pulled into La Spezia, the day dawned rather gloomy and damp. Not a good omen.

But no matter. We had booked a three hour “Florence on Your Own” shore excursion so we grabbed the umbrellas and headed out to join our tour.

The ride to Florence took about 90 minutes. The countryside looked lush and green and our guide informed us that they had had a lot of rain in Northern Italy in October. 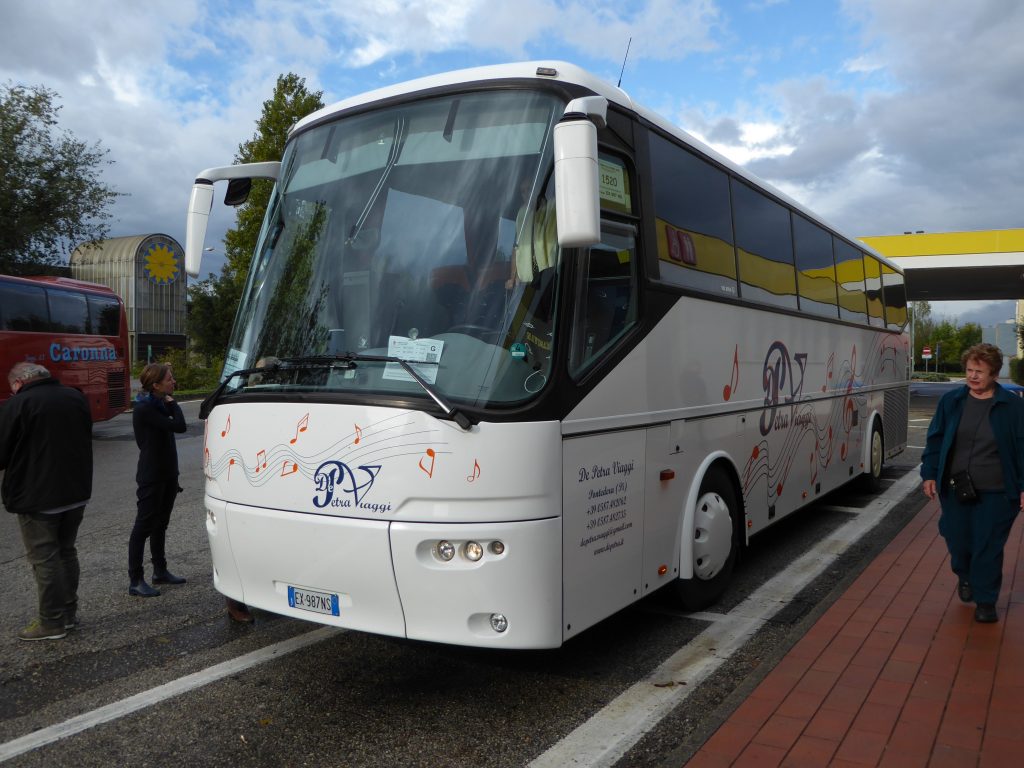 The weather wasn’t too bad when we made our pit stop about halfway there. Maybe things would be OK after all.

Our bus had facilities for folks in wheelchairs, so we were able to get in and park closer to the center of Florence than usual. We ended up near Santa Croce, and walked down to the Uffizi Palace. 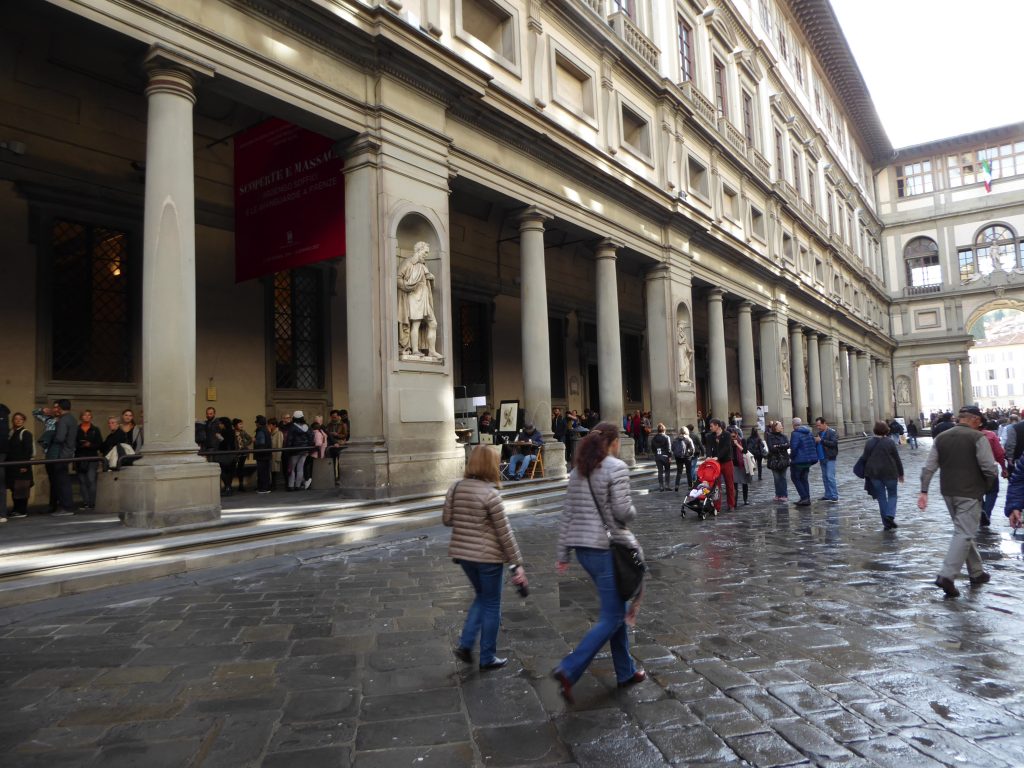 We would have liked to go into the Uffizi Gallery but unfortunately this was a free admission day in the city museums. They were lined up wall to wall at the Uffizi and we couldn’t spend an hour in line. So we decided to move on. 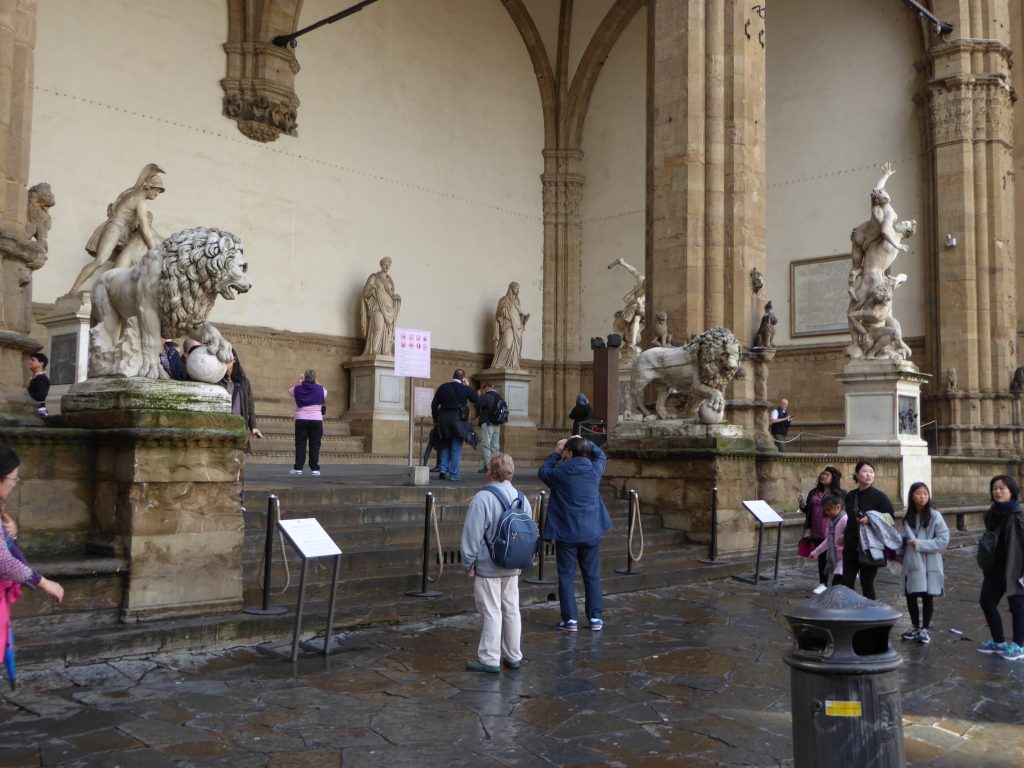 We went to the Piazza della Signoria where I always enjoy looking at the statues that are wired up electrically to zap pigeons. 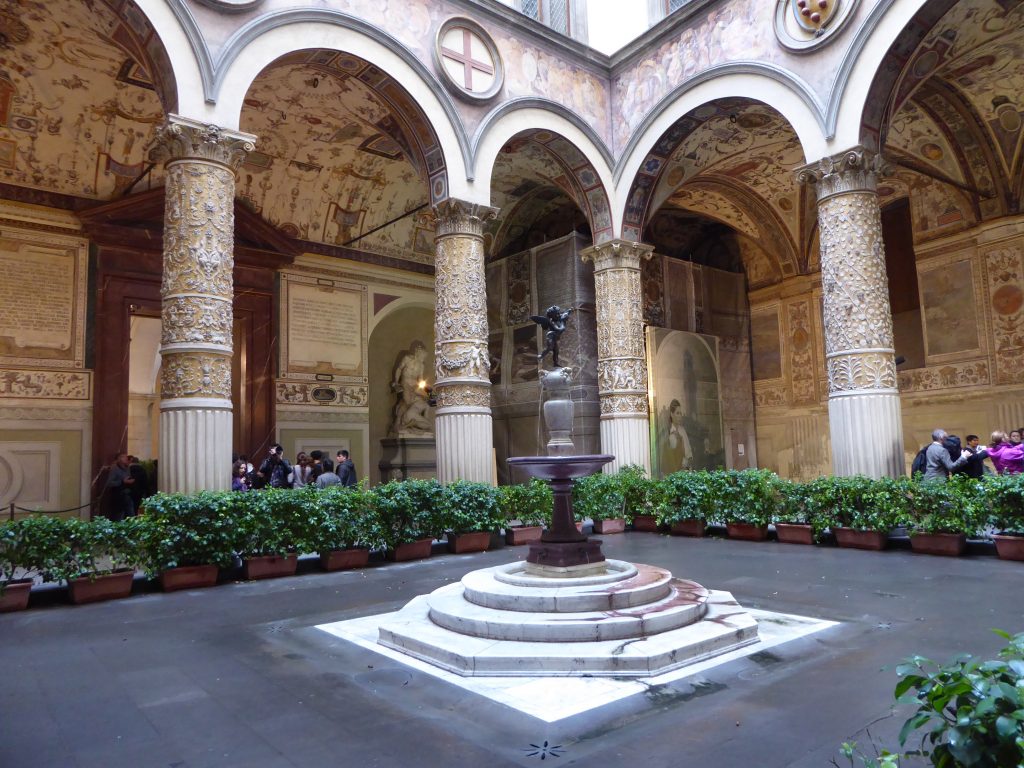 Then we had a brief walk through the entrance to the Palazzo Vecchio. It was free after all so why not? We decided to avoid the crowds at the Museum though and continued our walk up to the Duomo. 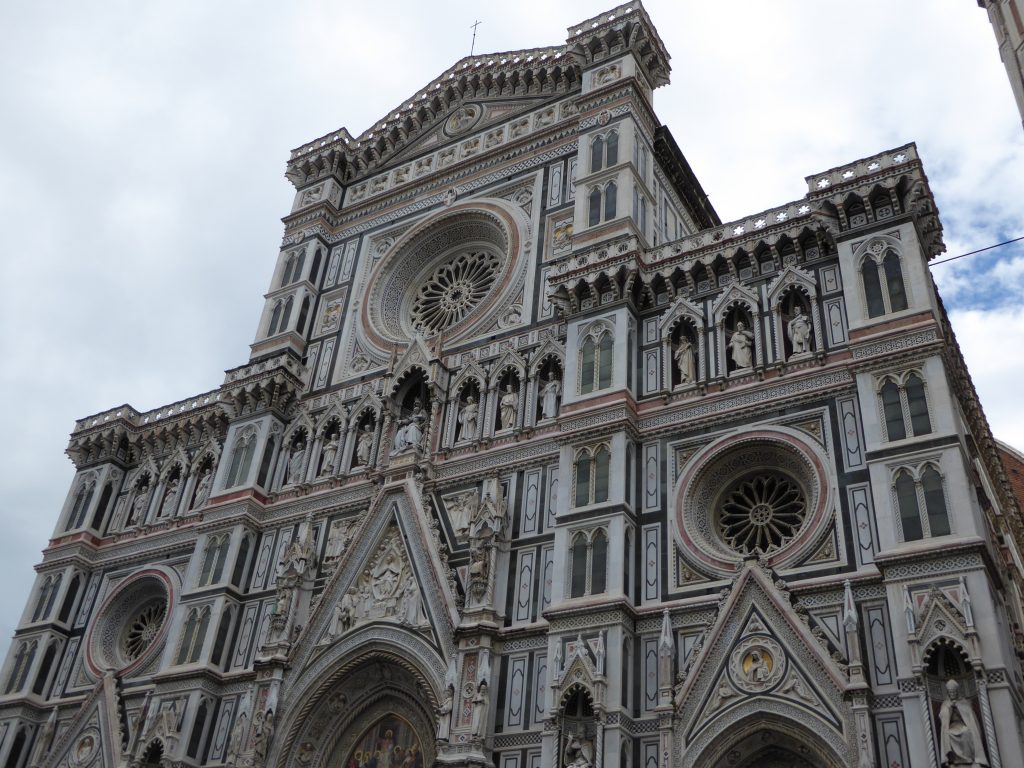 The Cathedral itself is looking pretty good. Just a tiny bit of scaffolding on the side, which I was careful to avoid photographing. 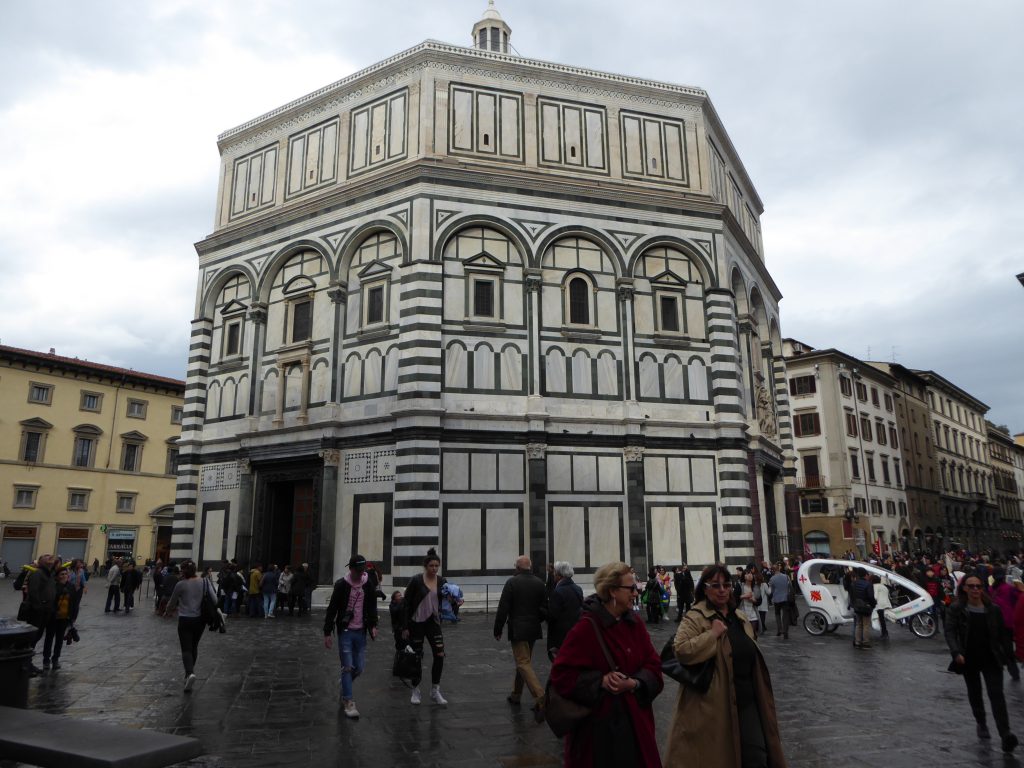 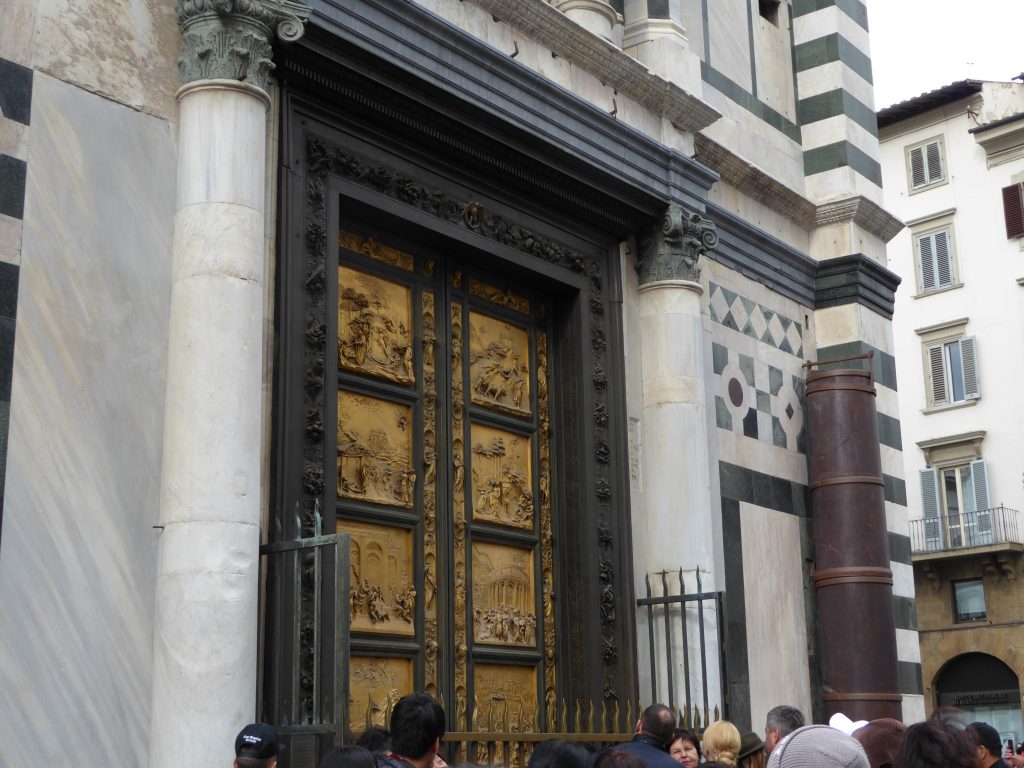 And what can you say about the “Gates of Paradise?” Michelangelo got that name right. 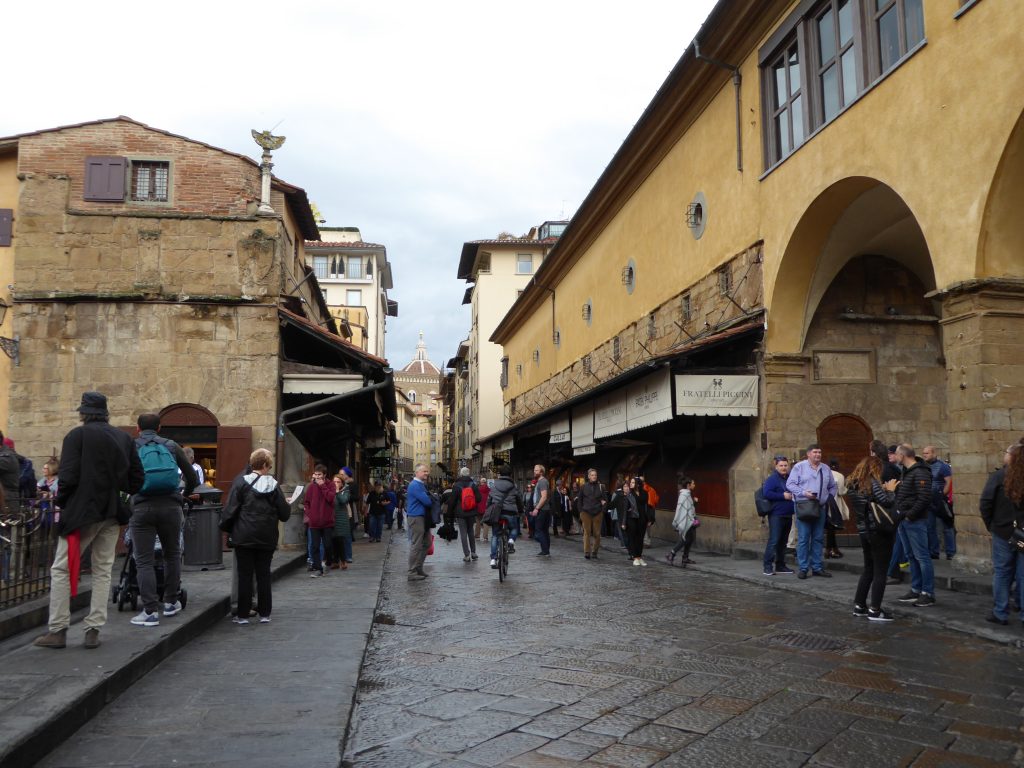 We went to Ponte Vecchio and although all the jewelry stores were open the crowds were smaller than we remembered. Maybe everybody was over in line at the Uffizi. 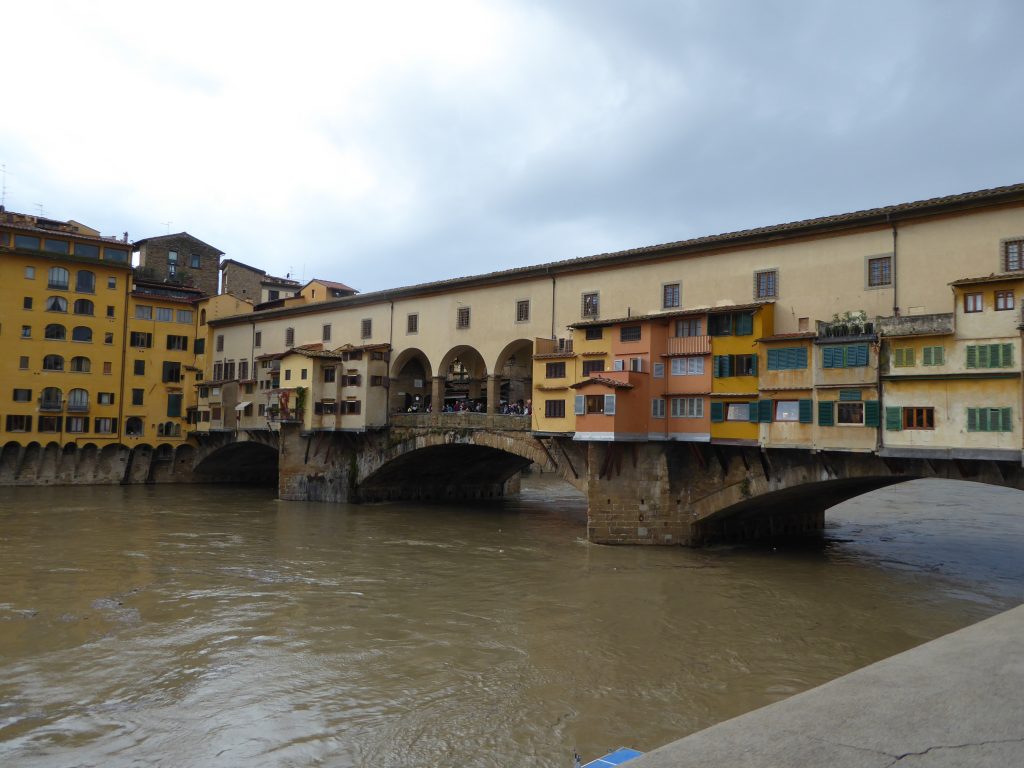 The Arno was swollen and muddy where it passed under the bridge. 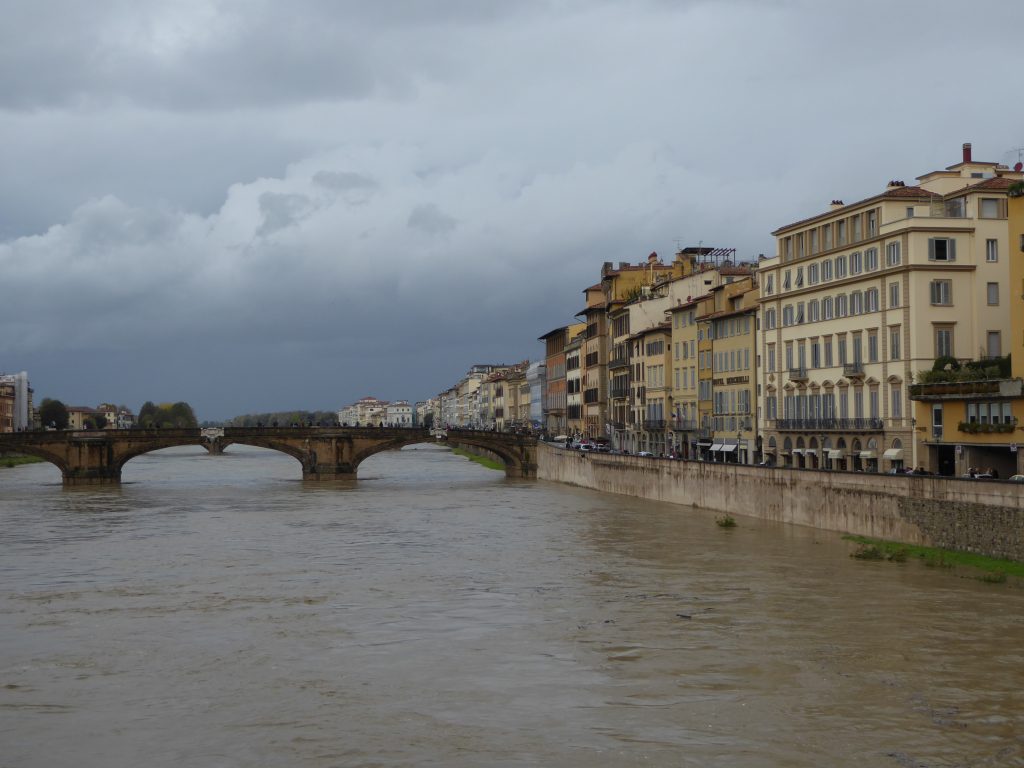 Another view of the muddy Arno. You can see what’s coming.

We walked along the river past the Uffizi again (the line was now really massive.) Then we bought some focaccia bread at a bakery. At this point the skies opened up. A highlight of our trip was standing in a side alley in Florence under our umbrellas, gnawing on a piece of desiccated foccacia while the lightning flashed and thunder crashed around us. A shopkeeper took pity on us and let us stand in his doorway while the worst of the rain came down. 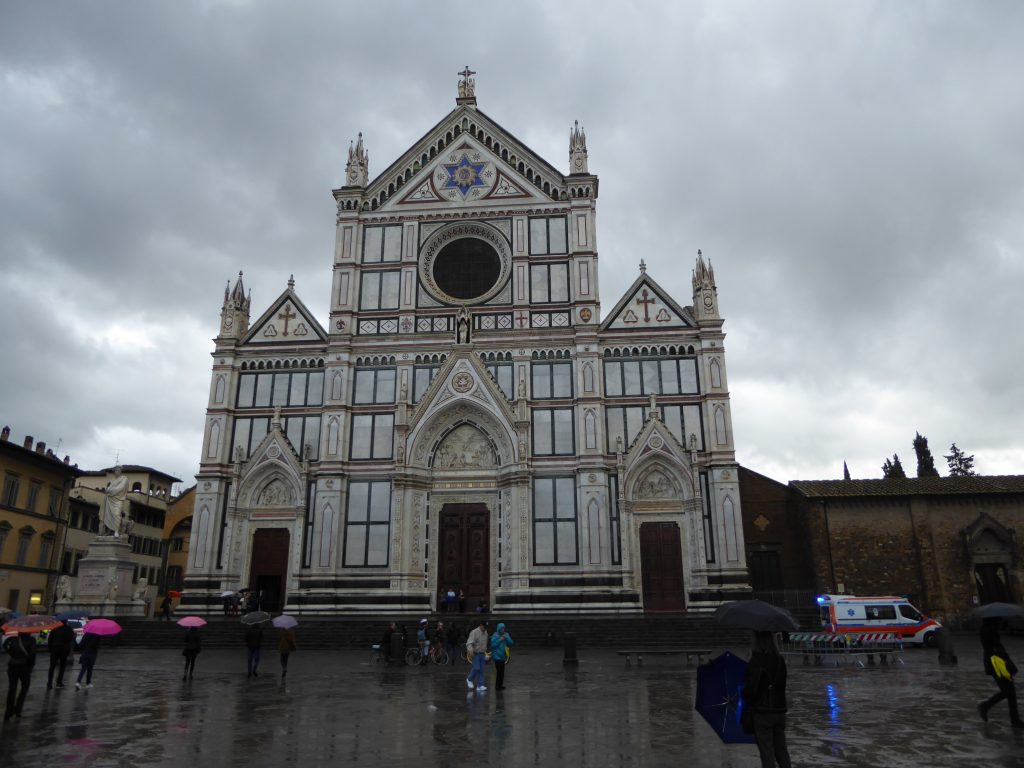 We made it to Santa Croce but like most churches that Sunday it was closed to tourists. Maria held our umbrellas while I took a photo. 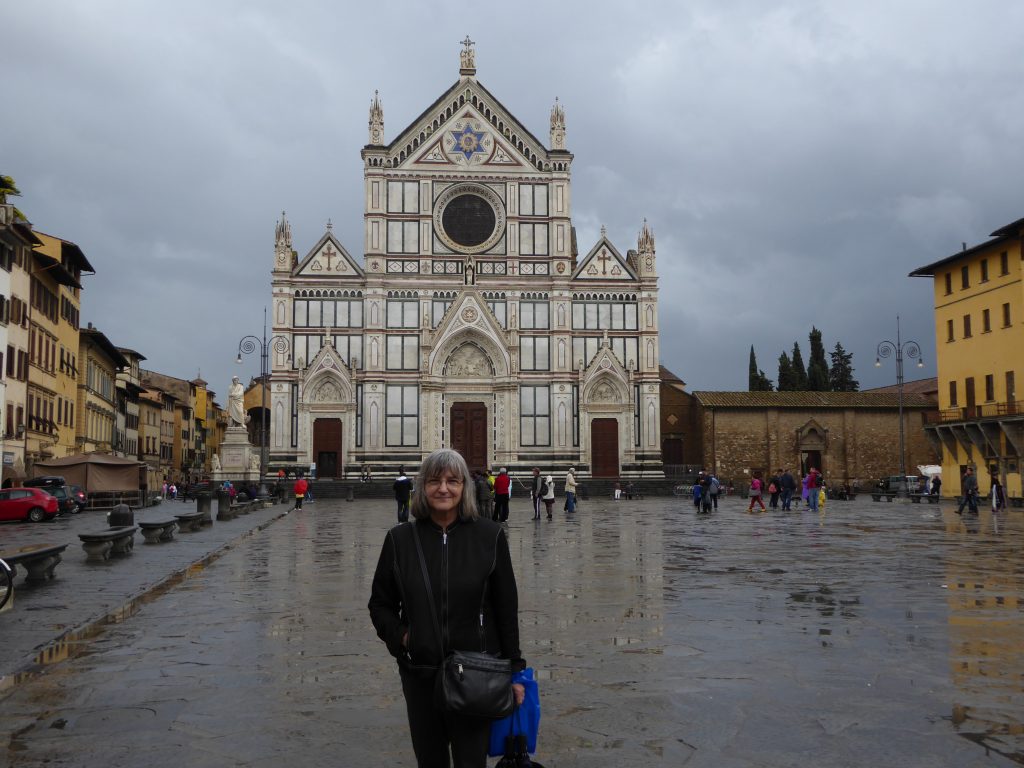 One last soggy photo and our time was up. We headed back to the bus. So ended our “three hour tour.”

On the way back we stopped at a leather factory (what tour doesn’t do that?) and Maria got some nice little change purses as souvenirs. Earlier on I had picked up a little leather credit card case to hold our Sea Passes and it gave great service all the rest of our journey. Nothing like Florentine leather. 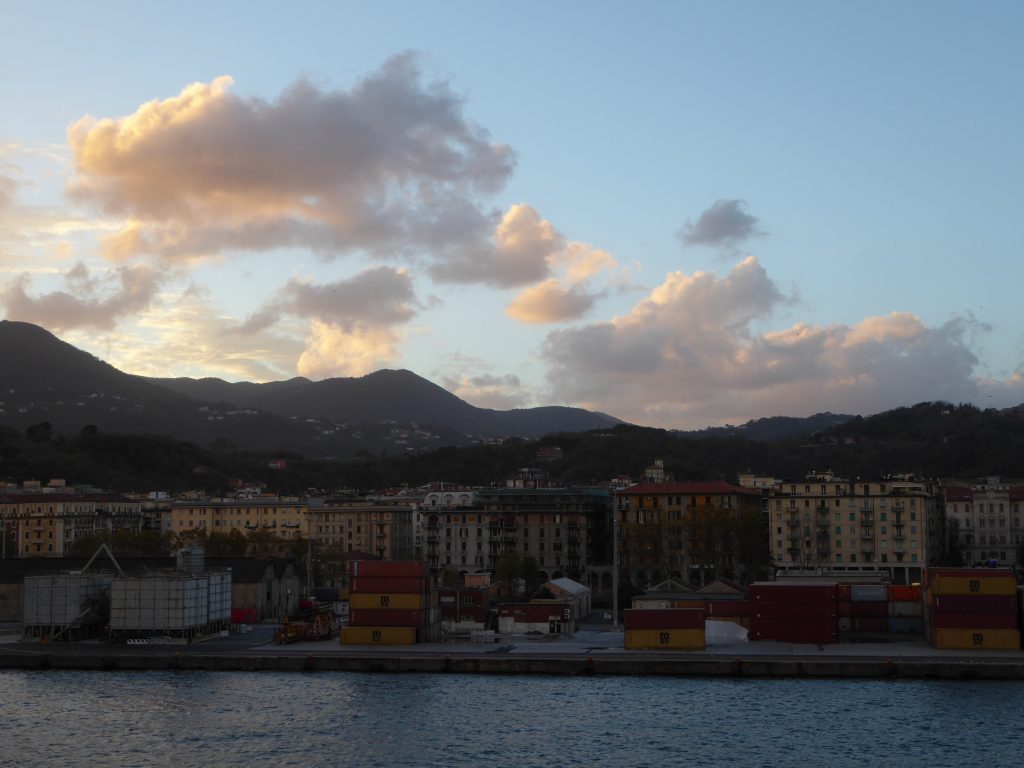 We rode back to La Spezia, got back on the ship, and as we prepared to sail away the clouds started to disappear. A good sign for our next port of call on the French Riviera.

Family Life Experience
Posted on April 26, 2019
I was deeply saddened by the passing of a much-beloved brother in law on April 24. I knew Fred Albi for over 30 years,...
Life Experience
Posted on March 19, 2020March 19, 2020
Well, it would have been nice. Last year at this time Maria and I booked a couple of cruises. Back to back actually. First...
Economics Hobbies Life Experience Technology
Posted on January 27, 2016February 14, 2018
We all know netbooks are dead, right ? These cheap low powered laptops had a short time in the sun between 2008 and 2012....