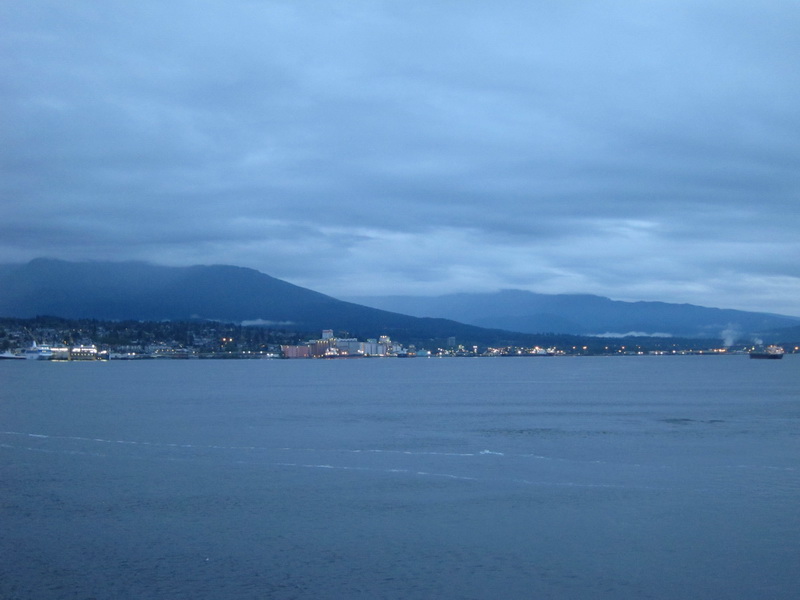 Our cruise was coming to an end early on the morning of May 1 as we slowly made our way under the Lions Gate Bridge and into Vancouver Harbor. All that was left was a leisurely disembarkation and a brief tour of the city before a dropoff at the airport. Piece of cake, right? Right. 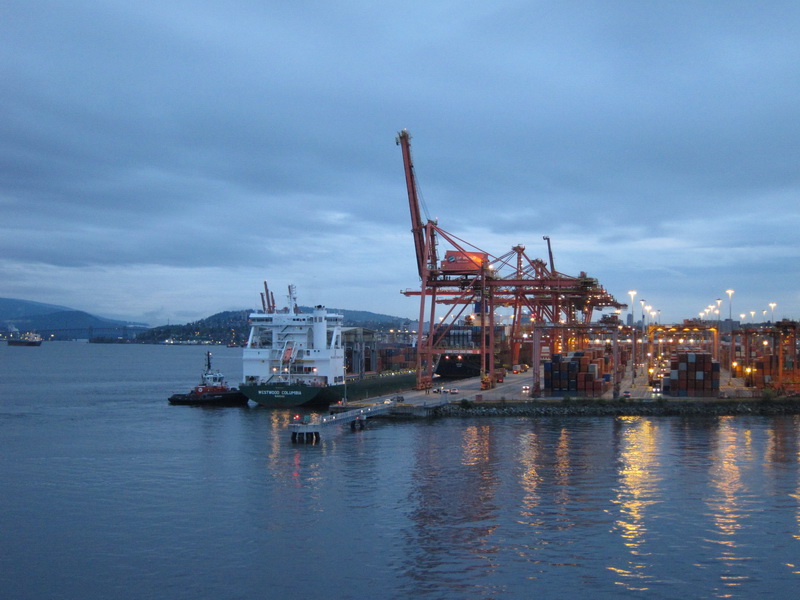 Past the container port with a look back at the Lions Gate. 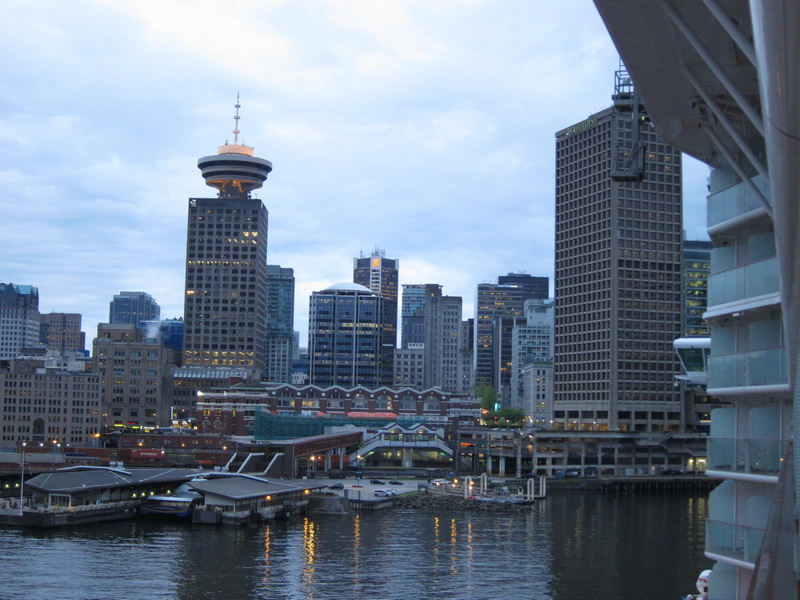 Quick view of the Vancouver skyline then off to breakfast and the Departure Lounge. This would be our last experience of the beautiful Solstice for some time as we don’t plan on more Australian cruising, nor will we go to Seattle for an Alaska cruise. 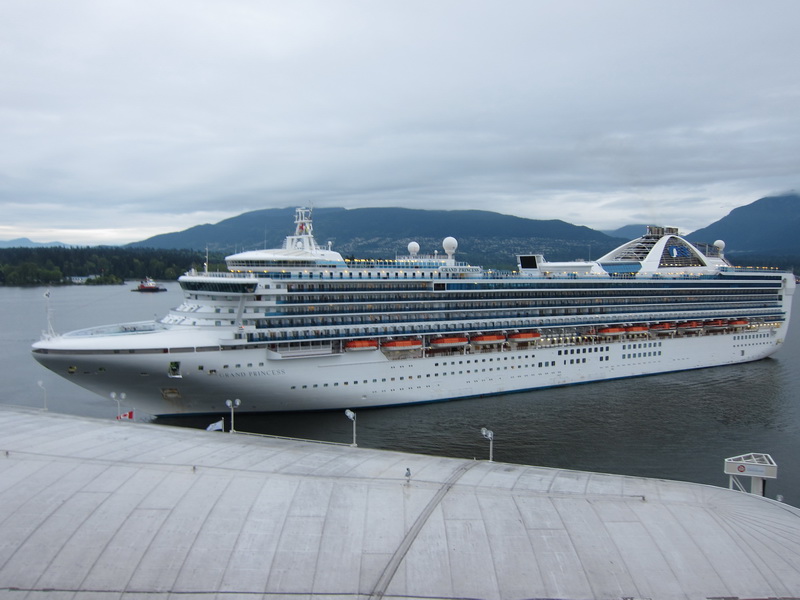 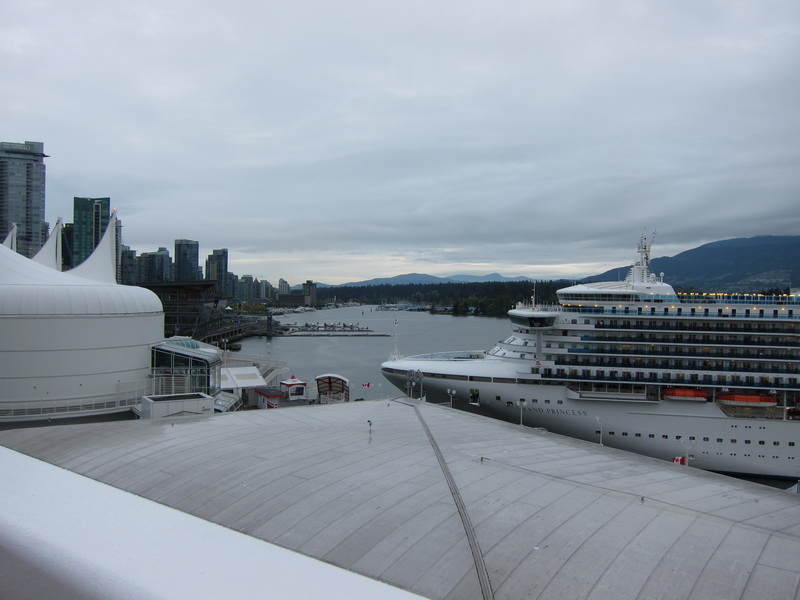 A bit cloudy but all in all not bad. We didn’t expect any delay in getting home. 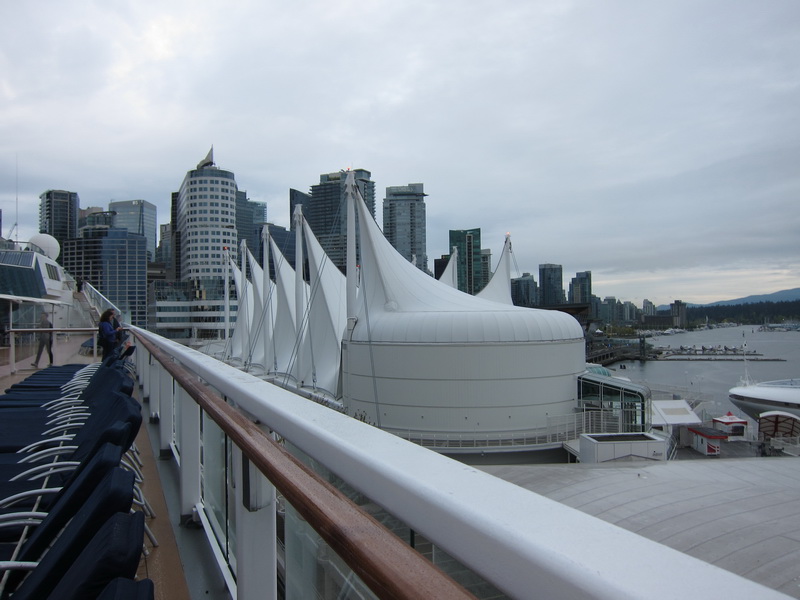 One last photo from the upper deck. Things went south from here in a hurry.
First our embarkation was delayed by late arrival of Canada Customs officers. When we did get off they told us our luggage wasn’t there yet, but we found it after a frantic search. Then we were in line for customs, and after that in a massive queue for our bus – which arrived late. Not a good start. 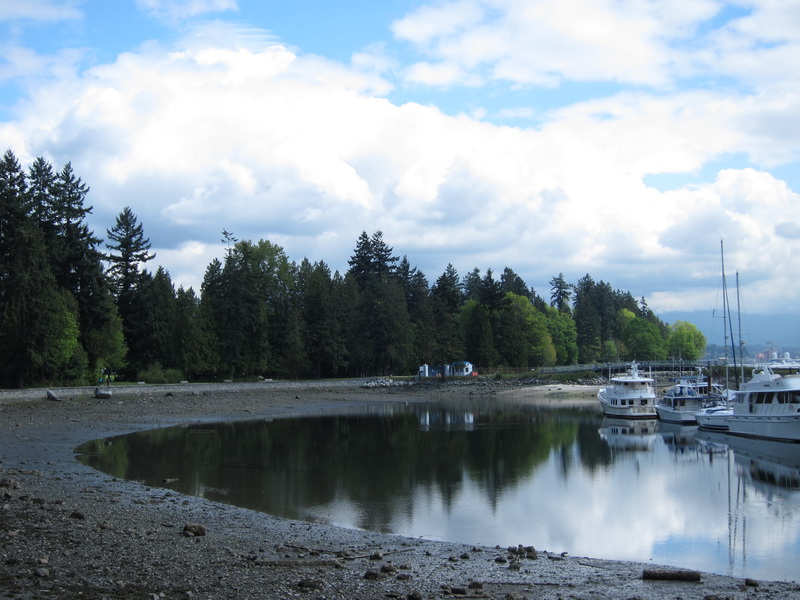 The bus drove slowly through the city. There was a lot of traffic and construction delay – especially near the BC Place stadium. Then we were off to Stanley park. The bus soon developed engine trouble and the driver had to stop here to let it cool down. 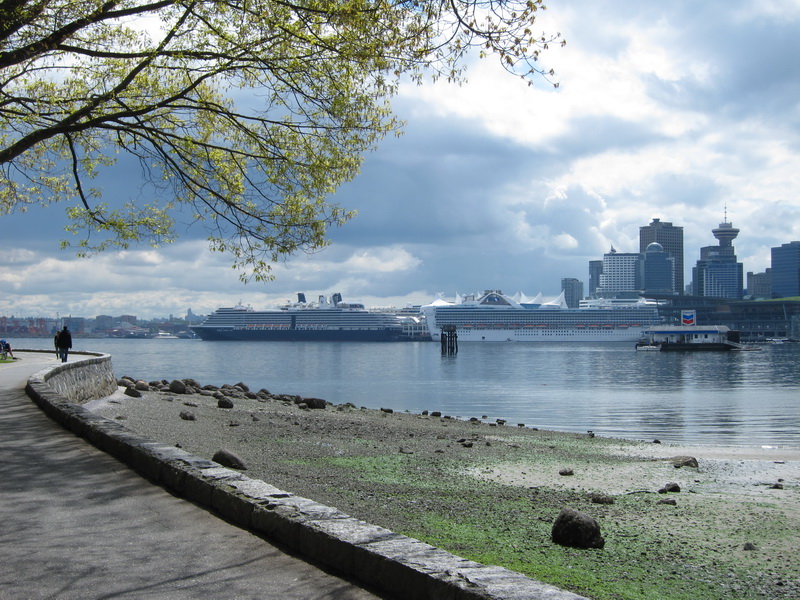 A bit further and we stopped again due to overheating, within view of where we started. Now we suspected why that bus was late in the first place. We got as far as the Lions Gate overlook in Stanley Park and the bus died completely. We had less than an hour to get to the airport and it was going to take 30 minutes to get a new bus.
There were three groups who had to make our flight. One of the younger guys ran to a local ice cream stand and ordered up three taxis. We pulled our luggage off the bus, piled into a cab and after a hectic ride made it to the airport with about 20 minutes to spare.

Air Canada rushed us through check-in and we raced to the departure gate.

At this point we were advised they had mechanical issues and the flight was delayed 90 minutes. We were starved and stressed out so we headed to the nearest fast food spot – a Rice Tales. There was a lineup there and by the time we ordered an announcement came to rush back to the departure gate –  they fixed the aircraft quickly and we would be leaving very soon. We had the folks at Rice Tales pack up our lunch to go and got on the plane. Whew!

The flight was jammed and we barely had room for our luggage, but we made it. After a 5 hour flight, reclaiming our bags, waiting for the Park ‘n Fly bus and then driving home we got back to Almonte around 12:30 AM local time. That’s all folks. What a day.

Family Life Experience
Posted on November 3, 2014October 2, 2018
My grandson came over for a visit yesterday. That got me thinking about the relationship I have with him, and indeed the relationship I...
Life Experience
Posted on January 21, 2008
We said good-bye to an old friend a couple of weeks ago.Our 1995 Dodge Neon gave up the ghost after 13 years, 150,000 km...
Life Experience Pets
Posted on October 8, 2015April 24, 2018
I read a Sales / Marketing blog the other day that outlined the 4 reasons for customer resistance to a sales pitch. This...