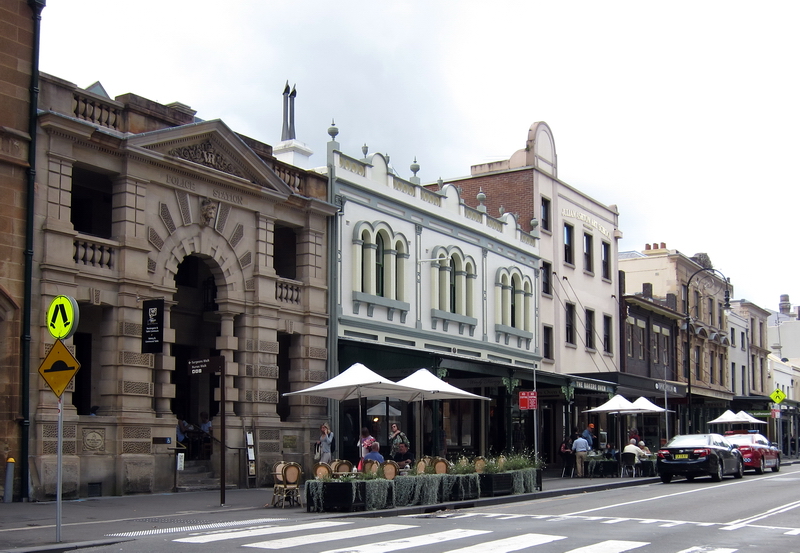 Located at the base of the Sydney Harbour Bridge and steps away from the Opera House and Circular Quay, The Rocks is one of the coolest districts in Sydney. We stayed here while waiting for our ship to come in.

The Rocks was the site of the original Sydney Hospital and the city’s main drag (George Street) got started here back in 1791. The Rocks also features two of the oldest pubs in Australia (Lord Nelson and Fortune of War.)

Most of the historic buildings are former warehouses and industrial sites that date back to Victorian times. In the late 1800s this area was basically a slum. Some of Sydney’s worst blackguards and n’eer-do-wells operated here – part of the “Rocks Push” gang. There is a narrow back alley called Suez Canal that was particularly bad in the 1880s – you’d never go there after dark. Today Suez Canal takes you to some fine restaurants and shops and links up George and Harrington Streets (it’s right next to the hotel where we stayed.)

In the early 1900s there was an outbreak of Bubonic Plague in The Rocks. Many of the worst slums were torn down before World War I and more were demolished to make room for the approaches to the Harbour Bridge in the 1920s. Many of the more solid sandstone places remained but in the 1970s even these fine old buildings were threatened by redevelopment. Fortunately saner heads prevailed, and the whole area got refurbished in the 1980s. The Harbour Rocks Hotel Sydney where we stayed is a fine example of Victorian warehouse architecture which has been converted to tourism.

Today The Rocks is a cultural and tourist mecca, convenient to the main attractions and downtown. It was a five minute walk with our luggage from the hotel to the Overseas Passenger Terminal – the most convenient embarkation we have ever had. If you plan a visit to Sydney, it’s a great place to eat, sleep and see the sights.