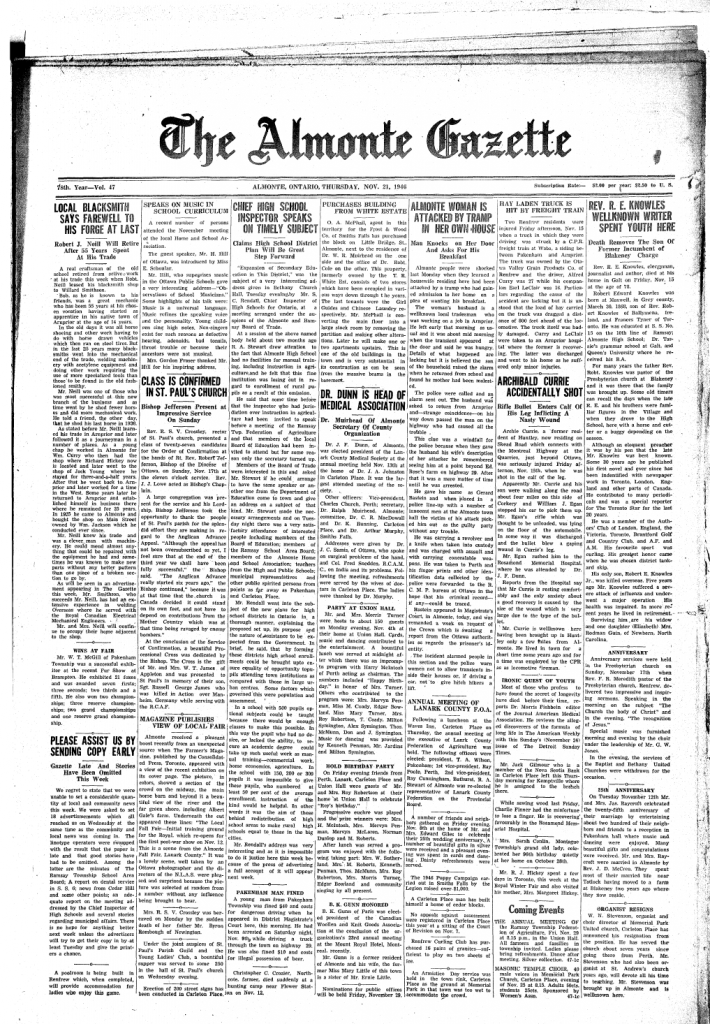 There are lots of news articles out there about the loss of journalism in the Internet age. Most of them deal with the disruption and shrinking incomes of major dailies like the New York and L.A. Times, the Chicago Tribune, the Globe and Mail and the Toronto Star. But there’s another aspect to the story – the vanishing local paper.

Above you see a copy of the front page of the Almonte Gazette as it looked a couple of days after I was born. At the time the Gazette had already been publishing for 79 years. It would go on to serve the local community for 142 years.

When we moved to the Valley in 2005 we actually had a weekly subscription to the Gazette – but it was already on its last legs. In 2005 the Gazette was sold by local conglomerate Runge Publishing to Metroland – a Toronto Star subsidiary – and by 2009 it was dead. The carcass was later folded in with tabloid freebie EMC and today it’s just something to deliver the local Freshco and Independent flyers. Oh, you can read a bit of it online if you want.

Of course this Metro-ization meant a lot of editor, reporter and publisher jobs went away and it happened all over Ontario. When I was a young chemist in Cobourg I made friends with a young lady who was starting out as a junior reporter with the Cobourg Sentinel-Star – quaint, old school, locally owned. Mandy devoted her working life to local issues, and it wasn’t until 2009 that Metroland came calling. She still writes a few articles for the Metro version today – but nobody could have her career in Cobourg nowadays.

So what’s happened to all the local color that used to appear in these pages? Check out the front page from November 1946 – Blacksmith retires, Archibald gets shot, Tramp attacks local woman – wow. I doubt that stuff showed up in the Globe and Mail – but it was locally relevant I suppose. Well, in a lot of towns that history doesn’t get recorded any more. You can research the whole history of Almonte up until 2010 online – it’s all there in the digitized pages of the Gazette (and it’s searchable.) So the Internet gives, and it takes away.

Fortunately for our local community there’s the Millstone News. It’s strictly an online entity – it was founded by legendary Toronto newsman Val Sears when he retired here, and now it’s carried on by a panel of volunteers. I doubt that it makes anything at all as far as revenue goes – but it sure is a handy thing to keep up on local issues. The bullies that vandalized our first waterfall to make themselves rich get held to account, even if the town fathers can’t stop them. I think the old Gazette publisher from a century ago would have been proud.

Hobbies Life Experience Technology
Posted on March 16, 2015October 2, 2018
The online and digital revolution in music has obtained a lot of benefits – it’s hard to imagine how cool it is to carry...
Life Experience
Posted on October 24, 2014October 2, 2018
In a couple of months I’ll be celebrating my 10th anniversary as a retiree. 10 years! In a couple more I’ll have been retired...
Life Experience
Posted on February 15, 2011December 10, 2015
I am pretty much a Linux guy when it comes to the PCs around here. Mind you, most of them are older pieces of...