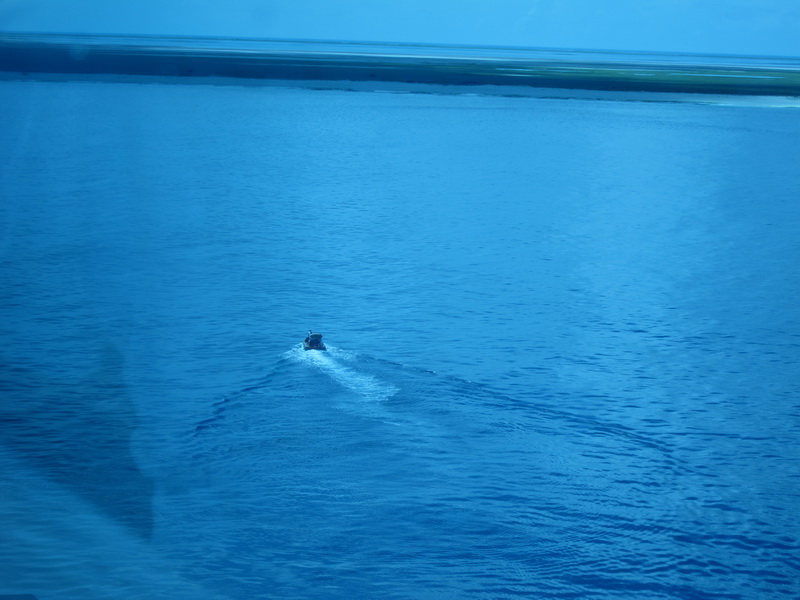 Our final visits before heading across the Pacific again were to the big island of Hawaii. We started out on the Kona side once more – this time at the port of Kailua Kona. It looks rather hazy here because of volcano smoke. That’s a feature of the big island I guess. 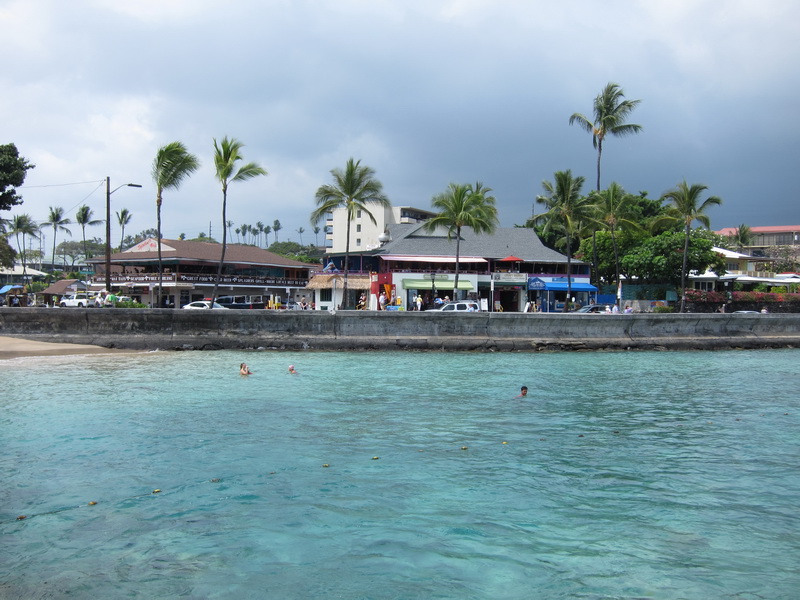 Here’s the landing area at Kailua Kona where the tender boats arrive. Some more shopping was available here if you didn’t get enough in Lahaina. 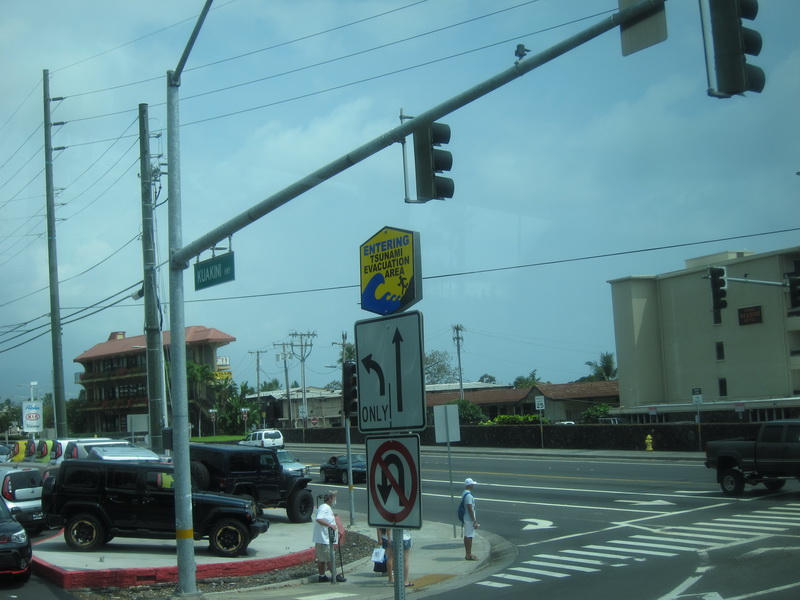 A rather sobering sign. Kailua Kona has been hit with several tsunamis over the years including the one from the Japanese  Tohuku earthquake in 2011. 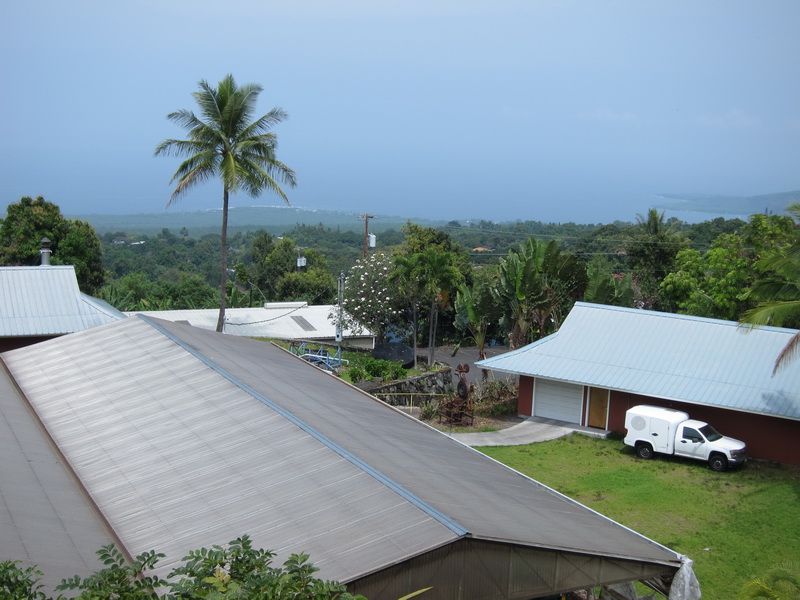 Off on our tour, our first stop was at the Royal Kona coffee factory. As we sipped our coffee on the deck, we could look across the bay to the Captain Cook memorial site. The place where Cook was killed is actually a United Kingdom territory. 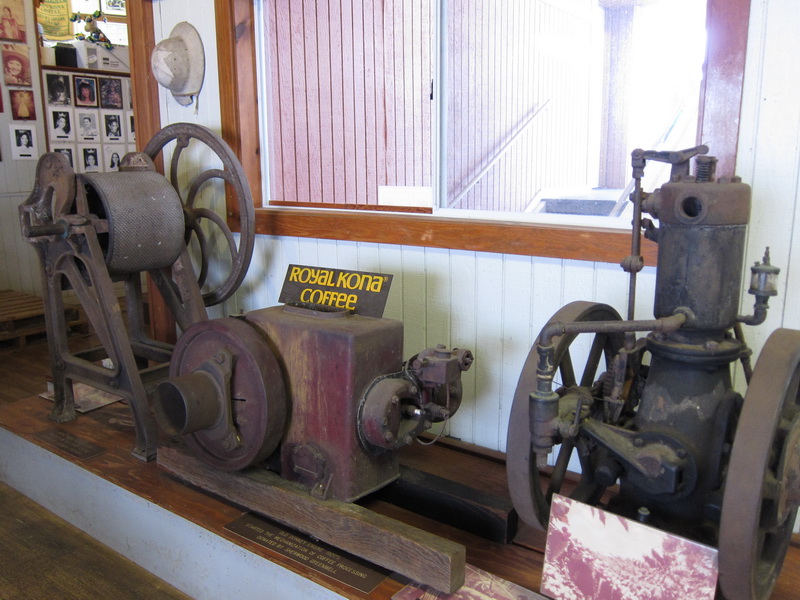 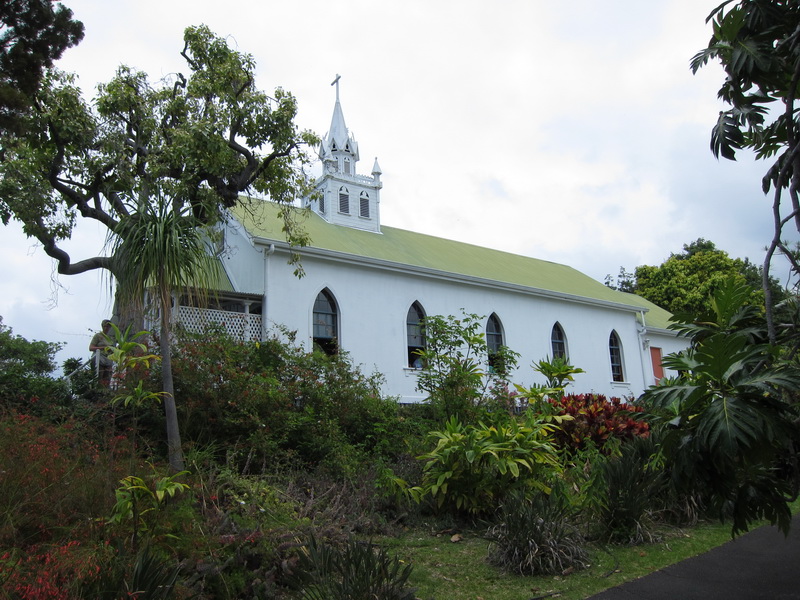 Next we visited the Painted Church – St Benedict’s on the slopes of Mauna Loa. The church was built in the late 1890s. 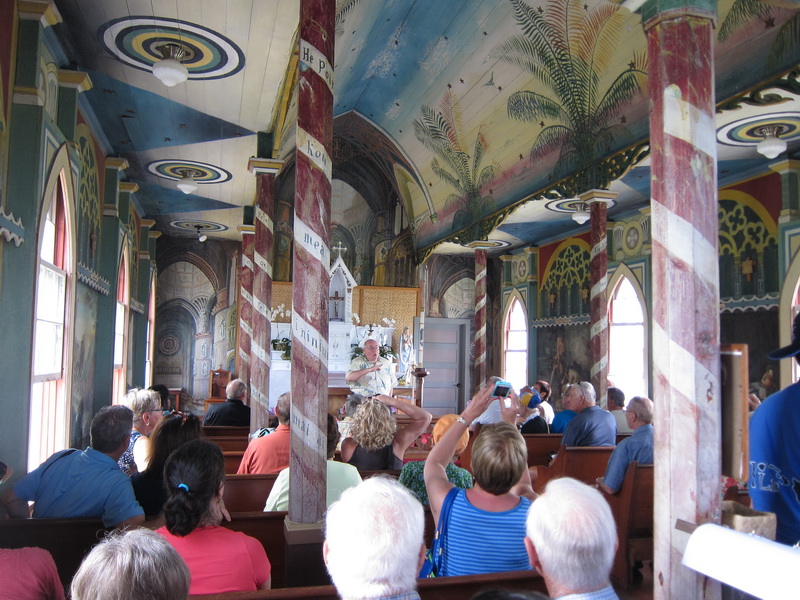 It’s the interior that’s painted . The pastor was a decent if untrained artist and he decorated the interior in the style of a European cathedral to give his parishioners a feel for what it was like. It’s pretty cool and a big tourist attraction. 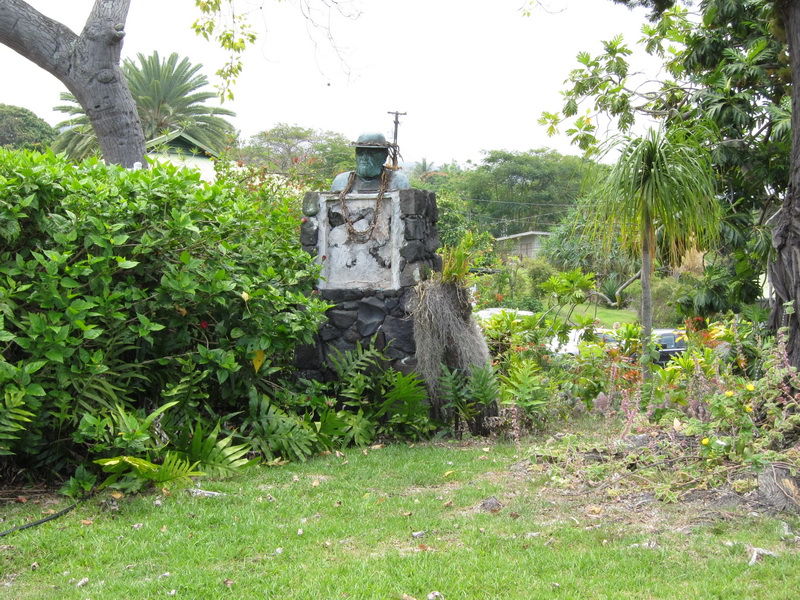 A primitive statue of Fr. Damian – who ministered in this area for a few years before he went to the Molokai leper colony. 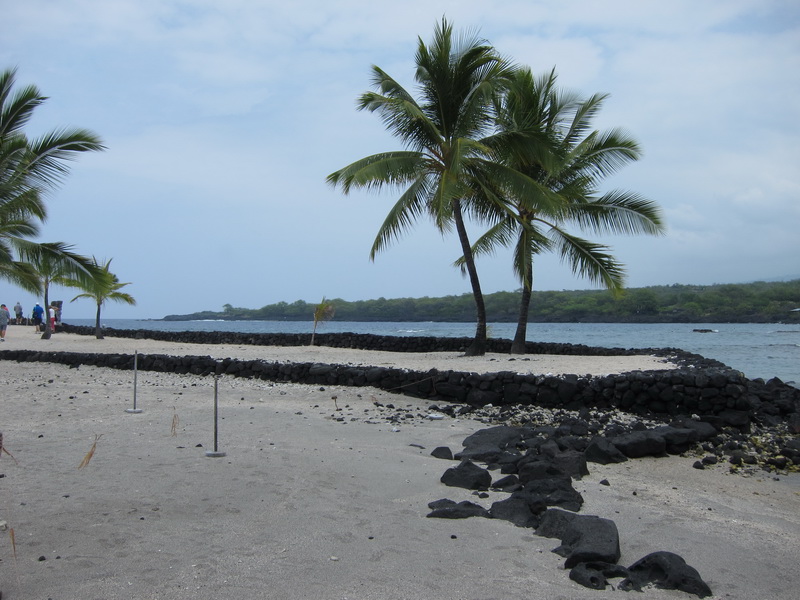 Our final stop on the tour was at the Pu’uhonua o Honaunau National Historic Park – which combines the residence of the Hawaiian chiefs with the Pu’uhonua Sanctuary. 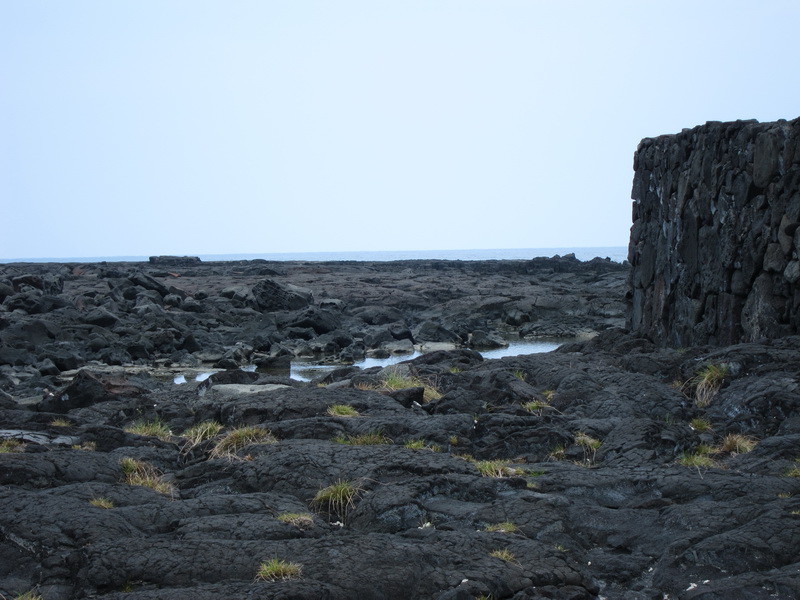 The Hawaiians had a system of Kapu (Taboo) laws and if you were unfortunate enough to one of break them your sentence was death normally. However if you managed to escape the Kapu Kops and make your way to the sanctuary, you could meet with the Big Kahuna, get absolved of your sins and start over. It wasn’t that easy though, The approach from the sea was guarded by a lot of lava rock. 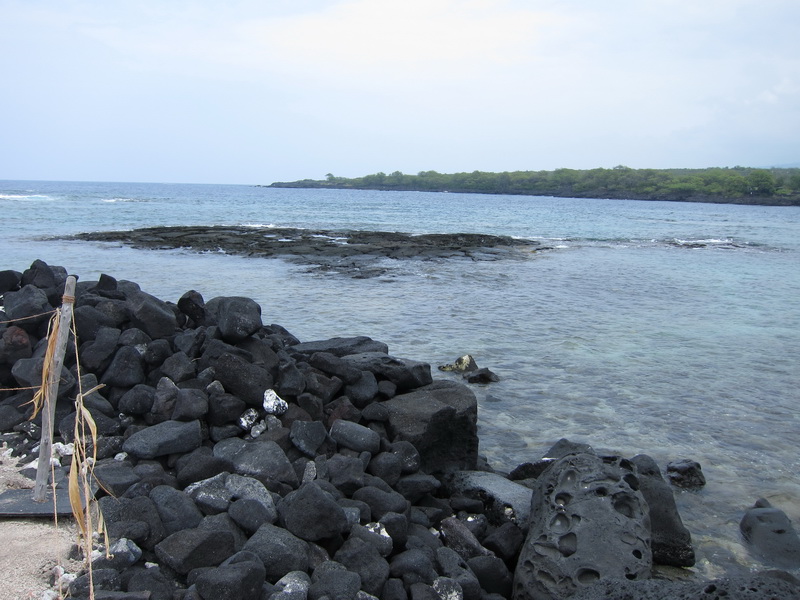 More obstacles in your path. 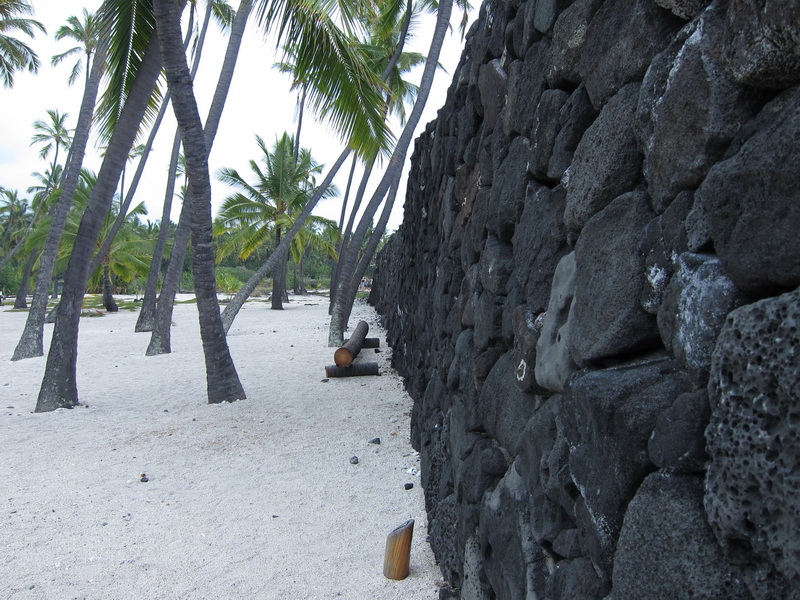 The sanctuary was partitioned off from the chief’s residence by this massive wall built in the 16th century. No sinners allowed inside here. 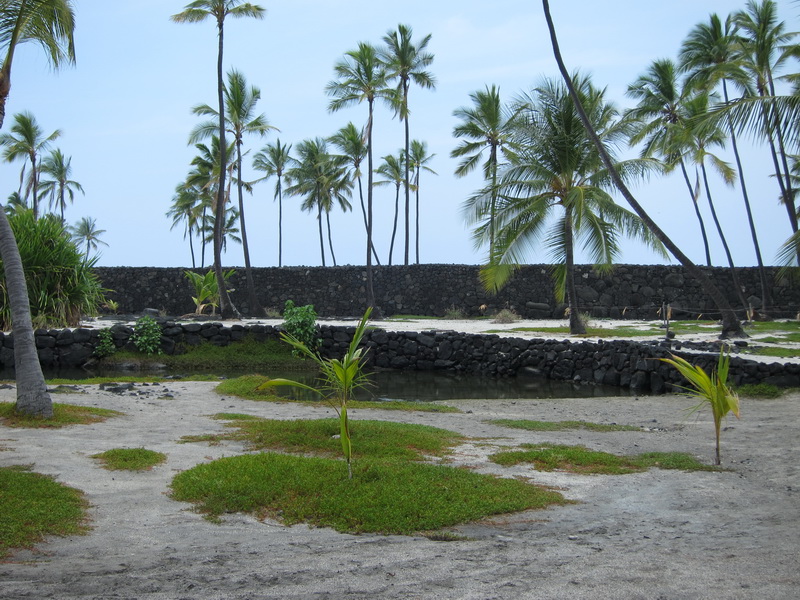 Behind the wall the chief had his residence, his fish ponds and the burial sites of his ancestors. 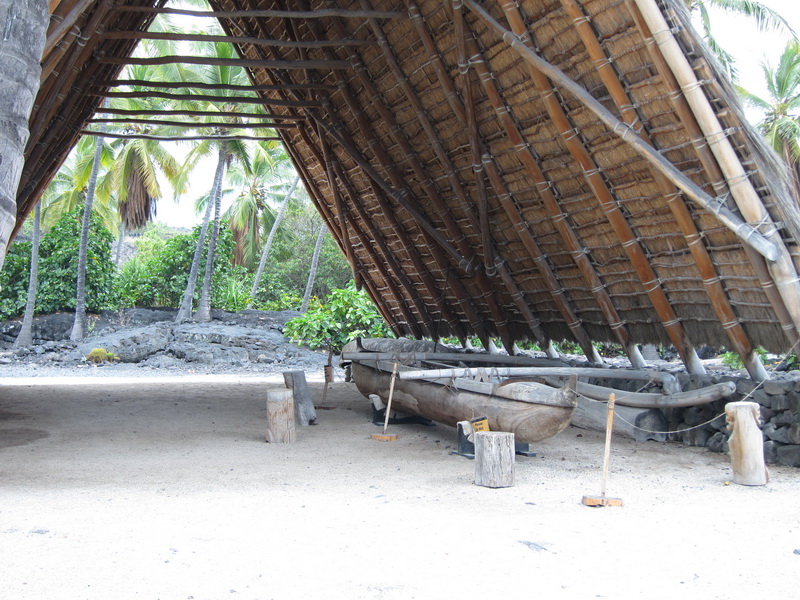 A typical Hawaiian workshop with the chief’s canoe. The roof is made from coconut palm leaves. 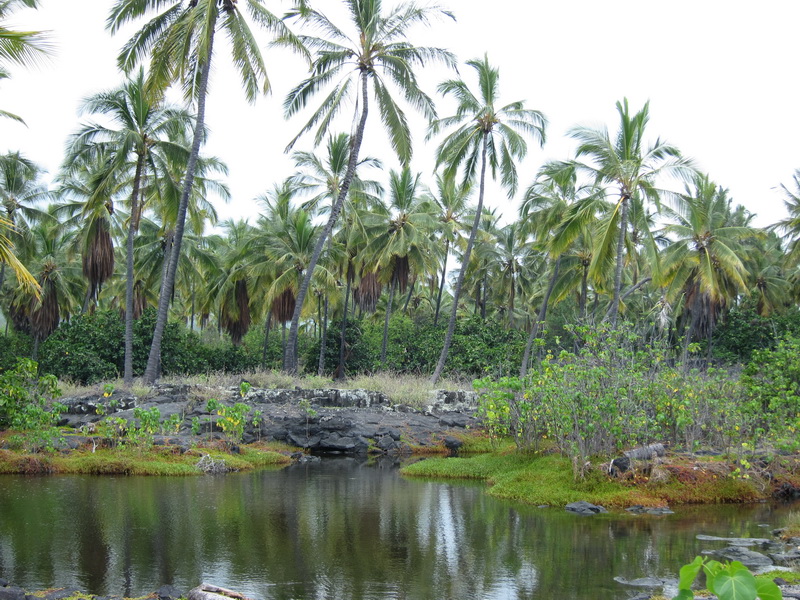 The national historic park is well worth the visit to get a feel for Hawaiian culture before the Europeans arrived. It would have been better to be a chief I think. I don’t like the idea of trying to get to that sanctuary.