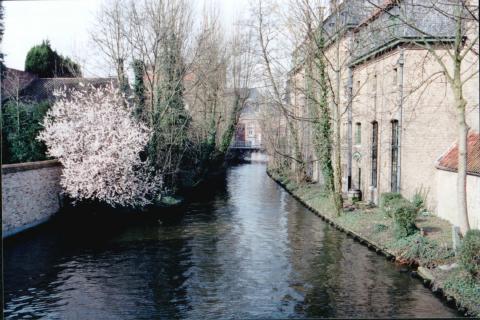 This upcoming week used to be one we looked forward to like no other. From 1987 until 2004 we used a week of my vacation to “get away” at March Break. Every year we hoped and prayed that the weather would be OK to fly from Toronto and only one year did we come close to not making it – the blizzard of 1993 where we got away by the skin of our teeth and ended up in the only vacation spot in the US where it was pleasant – Phoenix AZ.

The first trips we took were to Texas – mostly San Antonio and Corpus Christi. Then we went a bit further afield to Arizona – for sunshine and the Grand Canyon and Cactus League baseball. We finished up with flying trips to London, Paris, Amsterdam, Rome, and in one case Brussels. This particular photo is of Brugge Belgium in 2002.

All these frenetic trips ended in 2004. The following year we retired and we were busy with moving plans at March break. After that we had no need to cram our traveling into the same week so many others did. We have discovered the joy of going away in the “shoulder seasons” when prices are lower and places and airplanes are less crowded.

We sure have some great memories from those times, though.