The story of Ontario is largely a story of small towns, and we have been fortunate (?) enough to live in three that are really trendy right now. They weren’t necessarily trendy when we moved there, but it certainly worked out that way. When it comes to residence we always seem to be a bit ahead of our time.

So what makes an Ontario small town trendy? The three we have lived in have some things in common: 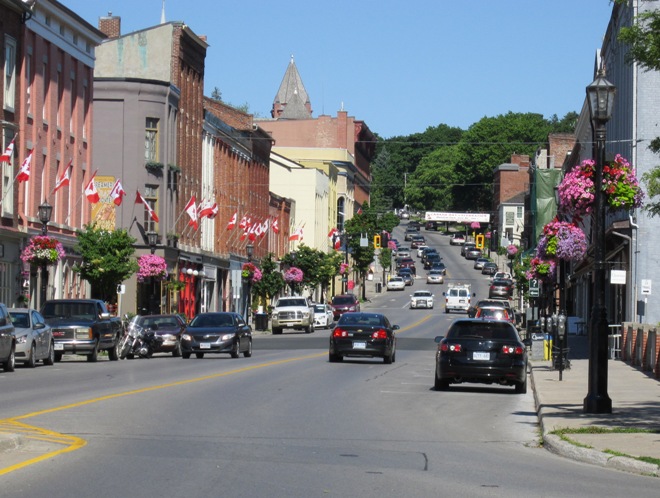 We moved here in 1972 when Maria and I got married. Our choice of Port Hope was made easy by the fact we could get an apartment there in a newer building for a reasonable rent. We both worked in Cobourg – a few miles away to the east.

Port Hope was a bit of a backwater then – folks from Cobourg called it “No Hope.” But we liked it, got involved in the community with youth groups. We bought our first home in Port Hope and probably would have stayed a while, except I was transferred to General Foods in Montreal.

Port Hope was never a one industry town. The plants that located there were medium sized except for the uranium processor Eldorado Nuclear. Plants in Port Hope made metal files for carpentry, conveyor equipment, auto parts, bathtubs and sinks. Unfortunately, most of these factories were branch plants that suffered from the Free Trade agreement and closed. Port Hope took quite a hit in the late ’80s and early ’90s.

We were quite surprised to see the changes in the early part of this century. The town has become quite a gentrified tourist mecca, and many of its fine old homes have been remodelled by Toronto refugees who sold their places in the GTA and retired east of the city. It was really a pleasure to see such a fine town becoming trendy, and I have no doubt the trend has continued to this day.

In 1959 Georgetown was a sleepy place of 3,000 located on the Credit River in North Halton county. Then Rex Heslop came to town and things really started to happen. By the time we moved there in 1979, the population was up to 12,000 and the first wave of development was complete. In the 1980s it was pretty quiet and Georgetown still had a small town atmosphere – a great place for my daughter to grow up.

Unfortunately, the town was too close to Toronto for such bucolic peace to last. The second wave of development began around 1990 and as far as I know has not stopped. The population is now around 40,000 and it is a very trendy place for the yuppies who want to get out of Brampton and Mississauga.

In its early days Georgetown was a paper mill town. Later on it had electrical equipment and auto parts makers, as well as an electronics firm. Some of this remains but by and large Georgetown is a dormitory suburb for Toronto. The classic Georgetown train station is now the center for GO Transit lines into the Big Smoke (or “The 6” as the rappers say today.)

Downtown Georgetown was always a cool area that had perfect camera angles for motion picture photography, so quite a few movies were made there while we were residents. The old town is hanging on, but the suburbs around Georgetown have sucked away a lot of business and the small town atmosphere is gone forever. Pity.

When we moved to Almonte, the gentrification and trendiness of downtown was getting under way, but we had no idea what was coming.

Almonte was a classic one industry town from 1850 until 1985 with the wool weaving factories taking center stage. The old mills remain. Some are places for restaurants and condos, others have offices for high tech firms. The Victorian streetscape has been lovingly restored and this restoration is encouraged financially by the Town. Some local entrepreneurs have done a great service by building attractive boutique malls. Antique stores abound. Add in the festivals that happen year round, the proximity to Ottawa, and the general loveliness of the river, waterfalls and Mill Street and you have a recipe for success – and trendiness.

We have learned to do our exploration and treasure hunting in Downtown Almonte during the week. The weekends are a zoo – especially in the summer when a festival happens just about every week.

Almonte is the only one of the 3 towns that doesn’t have a railway running through it any longer. It used to be on the CPR transcontinental line, but that changed 50 years ago. The railway line was disused for a few years and finally was taken up in 2012. The railway bridge remains in place, and I am sure the downtown business group hope it can be purchased from the railway and turned into a spectacular walkway with superb views.

Living in a trendy town. It didn’t start out that way but it has happened to us. Three times.