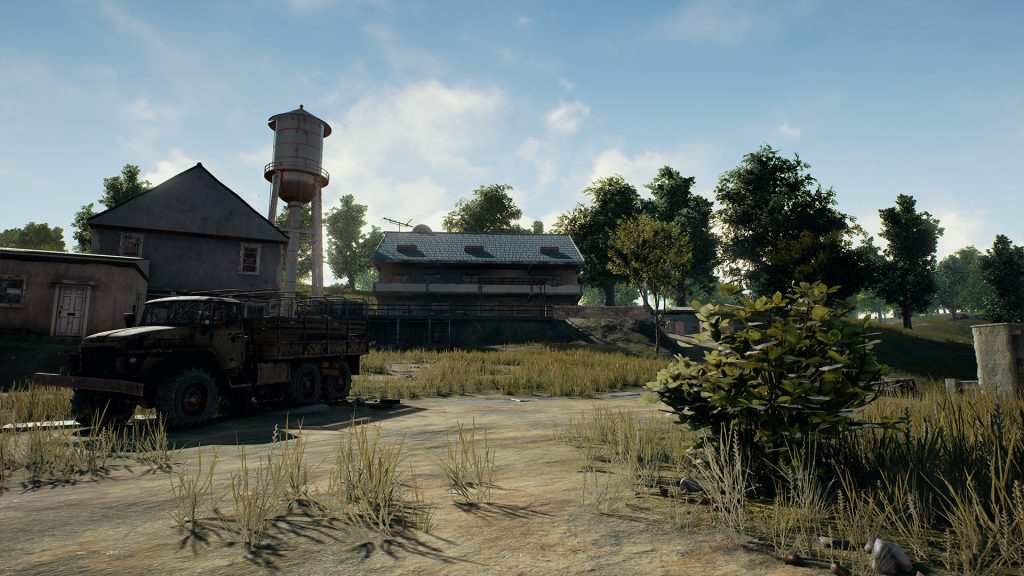 I used to be a fan of streaming videos on YouTube, but all that has changed lately. I have become addicted to live streaming on a site called Twitch.

Twitch is now owned by Amazon and I got a free subscription to it because we have Amazon Prime for home shopping.

One of my favorite YouTube video makers switched over to Twitch and I followed him there. On YouTube he made a series of videos where he played a video game called Minecraft. However on Twitch he and his friends often live stream another game called PlayerUnknown’s Battlegrounds (PUBG for short.)

PUBG is one of those multiplayer shoot-em-ups that are so popular with Millennials today. It is called a Battle Royale game – 100 matched up players parachute onto a god-forsaken Russian island where they have to find guns and armor and then shoot it out to the last person. It is frightening as heck for a new player – these folks are swept away in the first few moments after they land. The playing terrain keeps getting smaller and smaller and you have to keep moving or die anyway.

I would never be able to play this game well. but like many other voyeurs I find it very addictive to watch some one else go through the ordeal. There are various strategies you can try out. My favorite player doesn’t take it too seriously. He rides around in a car trying to run over other players, or circles the island on a motorcycle. He even tries a totally passive strategy where he hides and lets everyone else kill themselves. Once in a while he wins but most of the time he is happy to make it to the top 10.

He has a colleague who plays the game in squads of 4 or in duos. This guy is more skilled and aggressive and often serves as a team leader. He takes the game more seriously but doesn’t win all that often either. However he is very funny and makes lots of sarcastic comments about his opponents. Great mindless entertainment.

The other day neither of these streamers was on so I searched for who else I might spectate. And I discovered a whole other universe. The world of the professional PUBG gamer.

These guys have huge followings and when it comes to the game they have it all – skills, strategy, instinct.  They are Stone Killers. Assassins. They play in duos usually – a guy at the top of the game’s food chain can’t trust more than one partner to be good enough. They expect to win every game. They have attitudes like professional wrestlers. They know how to find the best weapons. They stalk other players like tigers. They are at the top of the PUBG leaderboards when it comes to wins.

Fortunately for new players the software that matches up a field of 100 players tend to seed these killing machines into very competitive games. A noob wouldn’t last a minute with these guys. I mean a duo like this will get at least 25-30 “kills” in a single game. They have the best playing equipment. They wear earphones to catch the slightest sound. They know all the tricks.

It’s hard to believe but folks like this actually make a living by streaming video game footage. Their fans subscribe to their channels for a small monthly charge and donate lots of cash to them. They play in tournaments and stream that on Twitch. Not your father’s video game experience to be sure.

Growing up I had a choice of real life careers. I don’t think I would have ever in my wildest dreams think that someone could have a career like this. Virtual mayhem. Go figure.

Life Experience
Posted on June 21, 2018
Of all the annoying things about home ownership, nothing is worse than water leaks. I suppose a leak in the basement outweighs a leaky...
Economics Hobbies Life Experience Technology
Posted on August 4, 2016February 11, 2018
One more post to finish up on digital photography. Obviously the camera business has moved on since 2010, and there have been numerous improvements...
Family Life Experience
Posted on August 24, 2015April 25, 2018
Hard to believe it was 5 years ago today that we got the call that Sarah was ready to go to the birthing...